Like everyone else I know, I gave the ol’ one-finger salute to 2020 and skipped into the new year thinking 2021 was bound to be better – even if we had a couple of rough early months to suffer through first.

However, in all my prognosticative positivity, I never imagined finding my likely pick for Best Restaurant of the Year – a charming spot at the northern edge of Roosevelt Row called Character – before January had even ended. Will something better come along in the next 11 months? Maybe, but – like Charles Barkley might say – I doubt it. This relaxed yet elevated New American restaurant, little more than a cozy nook with a patio, is one of my three favorite new restaurants in as many years, so the chances of an upstart needling it out of the top spot is pretty thin. 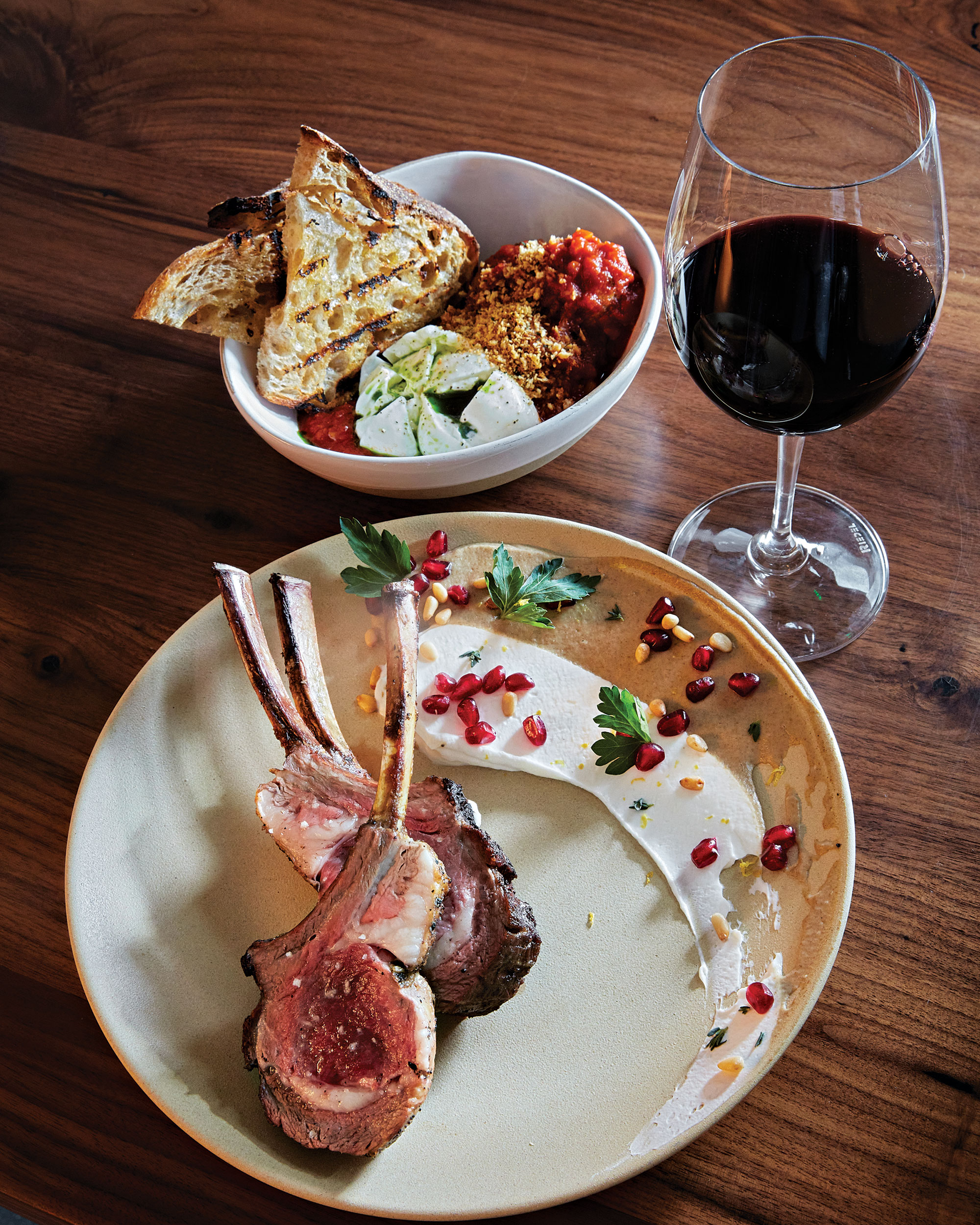 Lamb rack with puréed eggplant, below, and burrata and meatballs at Character; Photo by David B. Moore

More important than its historical architecture, or appealing bar, or even its intimate vibe, is the talent behind this venture, beginning with wine wonk and serial restaurateur Peter Kasperski, the owner of gone-but-not-forgotten Cowboy Ciao, Sea Saw, Kazimierz World Wine Bar, Digestif and Counter Intuitive, many of them groundbreaking (or at least rules-breaking) in their day. Kasperski is joined by fellow owner and former employee Richie Moe, one of the city’s most talented barmen, with whom he recruited Chef Justin “Red” Hauska (whose own stellar résumé includes Binkley’s and Kai) to head up the kitchen. It’s a formidable team, and for anyone who knows these quirky, big-personality partners, the name Character has multiple meanings – industry “characters” with decades of experience lending “character” to a restaurant narrative with an ever-evolving cast of “characters.” If that’s all a bit too high-concept (not to mention redundant) for your taste, just know that Hauska’s frequently changing, globally influenced menu tells a story, and that arc is supported by Moe’s exceptional cocktails and Kasperski’s geeky, nimble wine list. 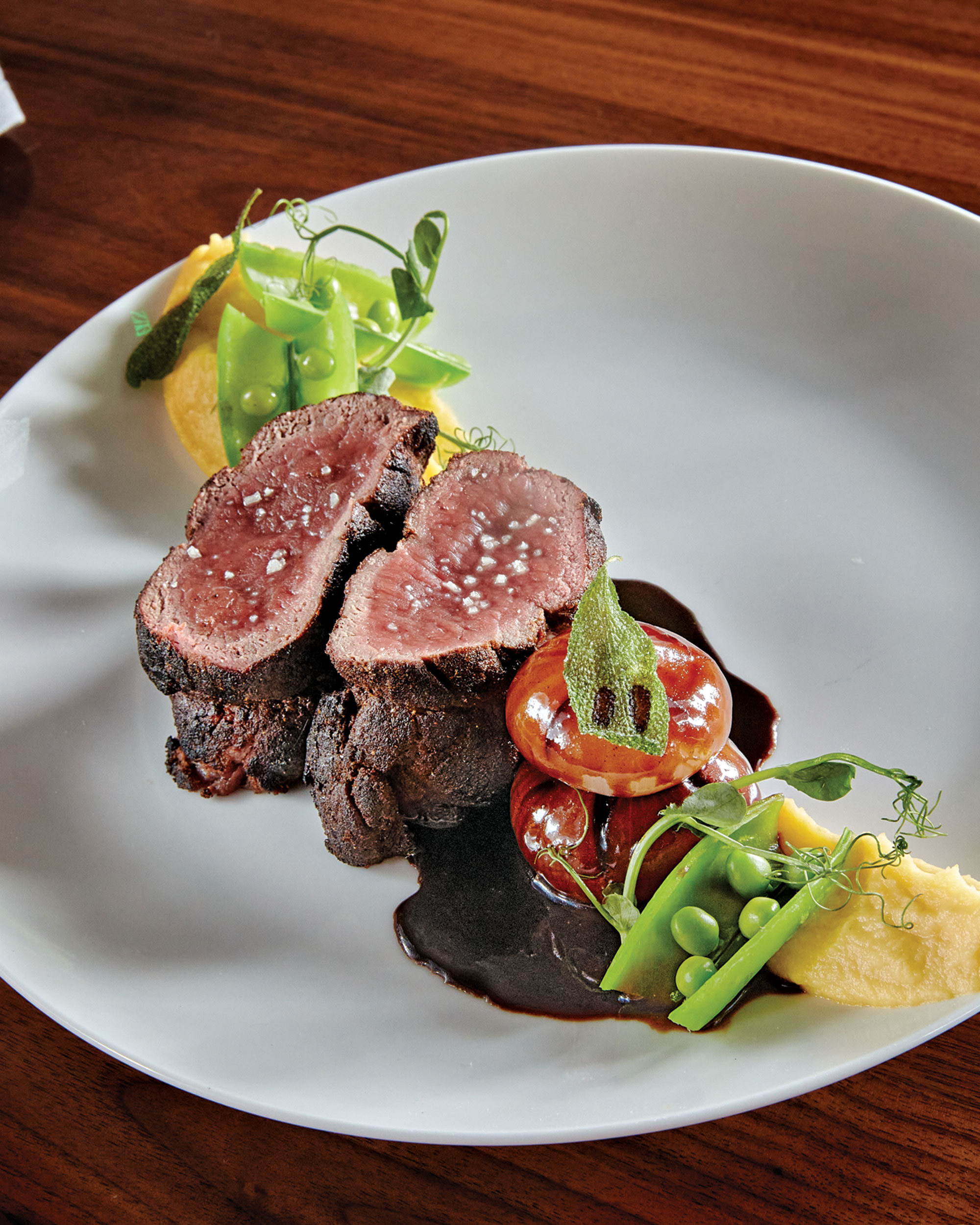 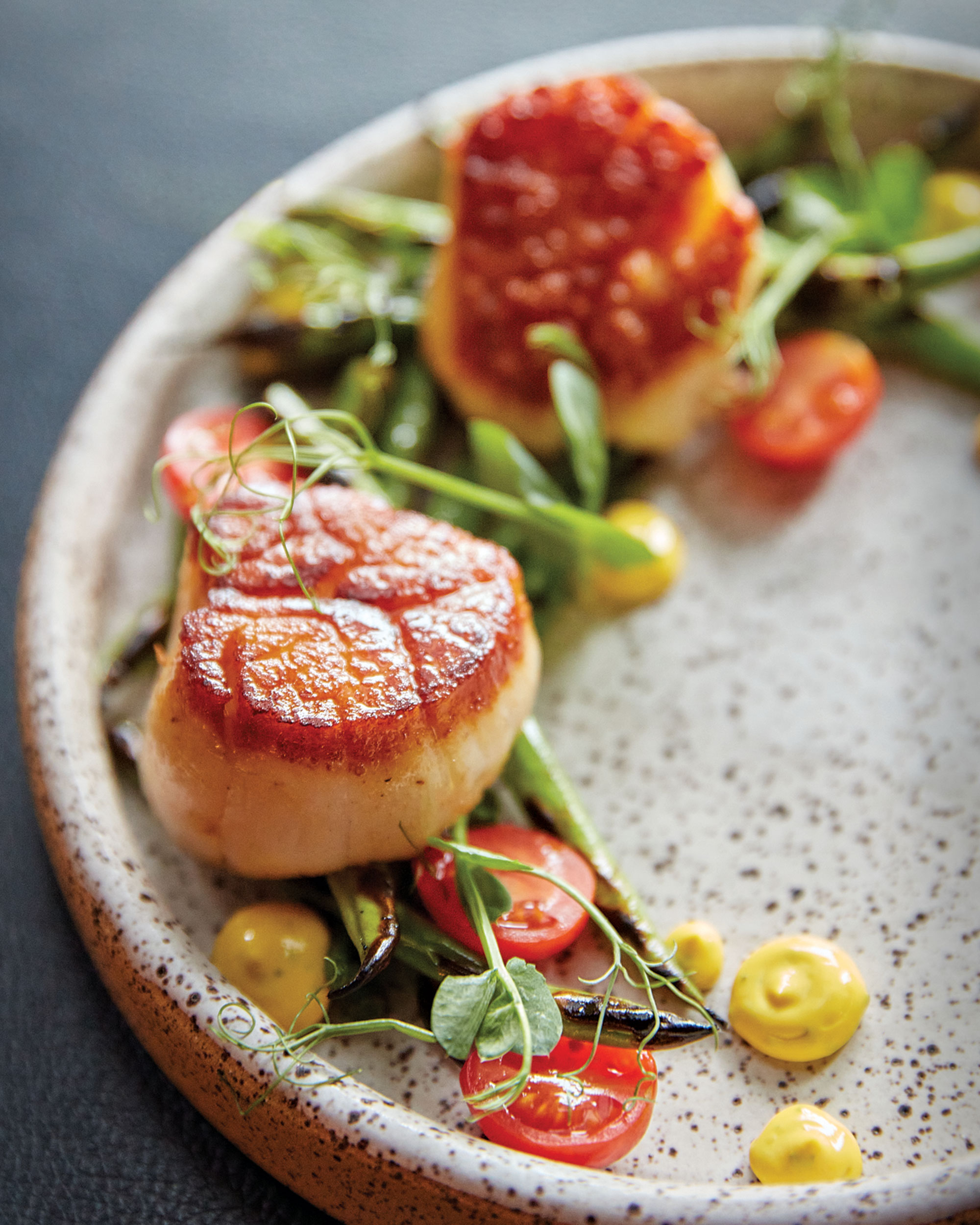 By the time this issue hits your mailbox, Moe will have opened Alias, a little speakeasy behind Character, where drinks and meals will be wildly fanciful. But even his more down-to-earth tipples at Character demonstrate his mixology mastery. This early assessment is based on a frothy mezcal-based drink named Jefe the Enabler; and another called Glowing Star Sazerac, whose salient feature is star anise atop a lozenge of absinthe candy, the anise set on fire to release its licorice-y essence. 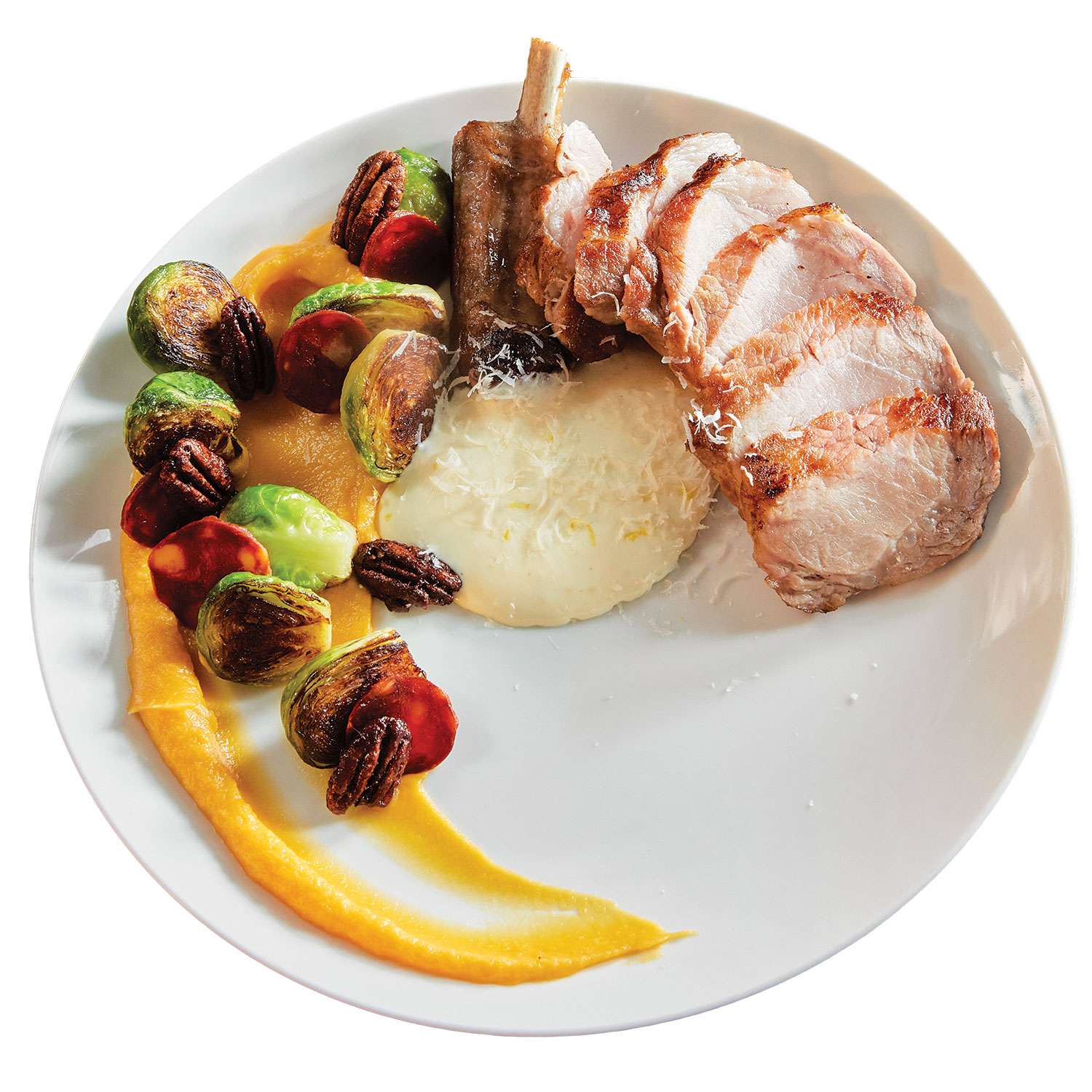 Hauska’s gorgeously composed and slightly larger plates from the “Graze” section demonstrate his labor-intensive, high-end restaurant chops. All three I tried were fabulous: dripping duck confit ragout overlaid with sheepshead and shiitake mushrooms, the demi-enriched meat spooned over a cloud-like cauliflower purée laced with Emmental; browned-to-crispiness sea scallops, blistered haricots verts and impossibly sweet cherry tomatoes arranged with sunny dots of creamy saffron Béarnaise; and a dreamy pairing of basil oil-drizzled burrata and meatballs, bathed in a rustic tomato sauce aromatic with fennel, its nubbly surface crunchy with bread crumbs. Triangles of grill-blackened bread tucked into the edge of the bowl are provided for mopping up every glorious drop. 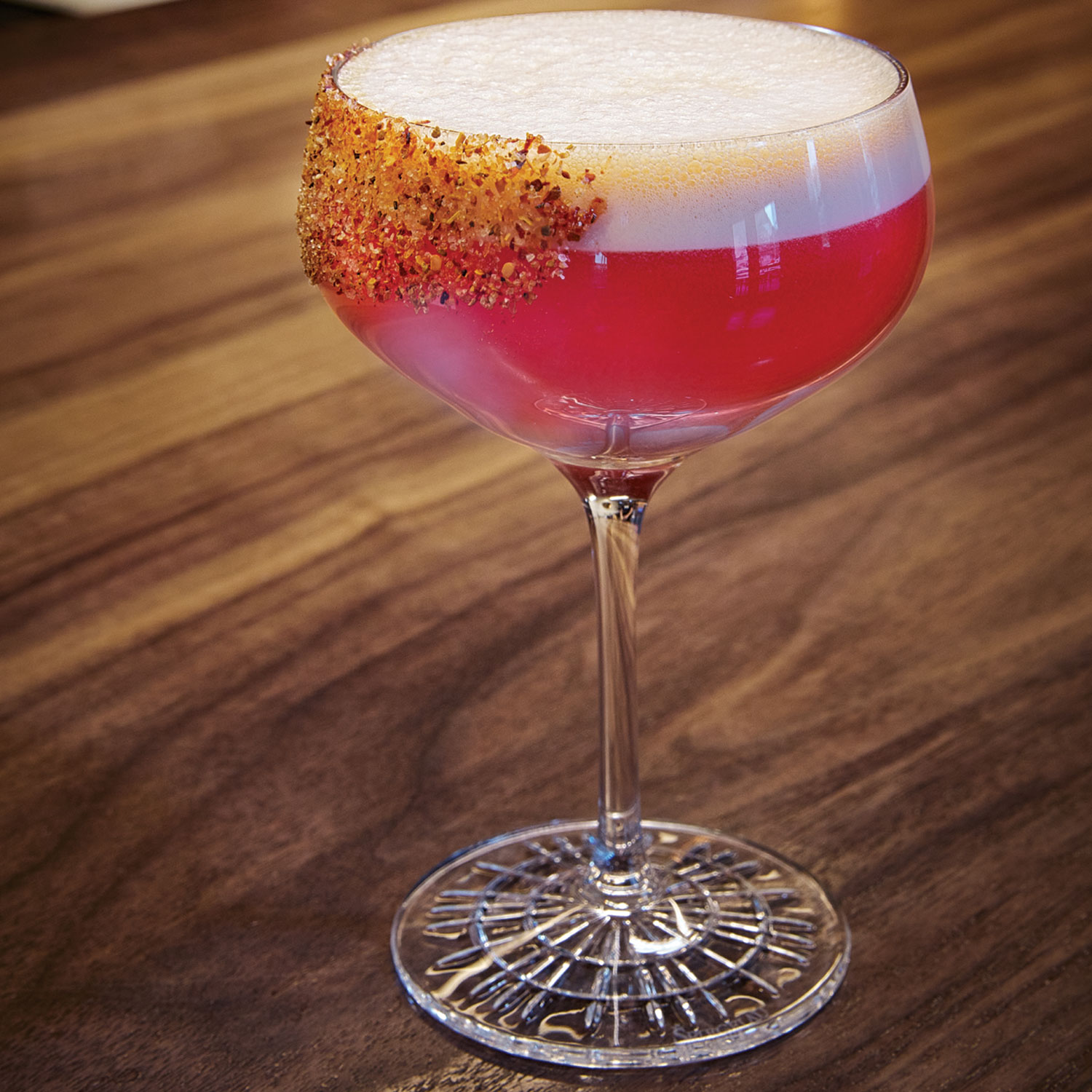 Jefe the Enabler cocktail; Photo by David B. Moore

After putting away so many luxurious preambles, I’m surprised to find myself crushing the entrées with the same full-throttle enthusiasm. Mesquite-grilled venison loin – cooked rare, dusted with sea salt and set in a velvety puddle of beurre rouge (red wine butter) – is earthy, smooth and fabulous with whipped butternut squash, snap peas and cipollini. I’m just as crazy about faintly pink Berkshire pork chops, caramelized at the edges and sided with butternut squash purée, roasted Brussels sprouts, spiced pecans and a Parmesan mousse I’d happily bathe in. Sumac- and Urfa-rubbed lamb rack, served with yogurt and a smoky schmear of puréed eggplant, dotted with pine nuts and juicy pomegranate arils, is every bit as good, an elevated take on familiar Middle Eastern ingredients we know and love.

I keep looking for a flaw somewhere so that this review is more than a gushing heap of superlatives, but other than slightly undercooked Brussels sprouts, I can’t find a thing. Certainly not whiskey butterscotch bread pudding, made with house-baked bread and sided with butter pecan/butterscotch swirl ice cream. The bread pudding is Hauska’s ridiculously crunchy, ultra-satisfying handiwork, while chef Country Velador, owner of New Wave Market and Super Chunk Sweets & Treats, provides the excellent accompaniment.

It must be obvious. I’m having the fluttery “this is it” moment associated with new love, and it’s all for Character, the best new restaurant of the year – I predict from the limb on which I’m standing.

There are no comments, add yours